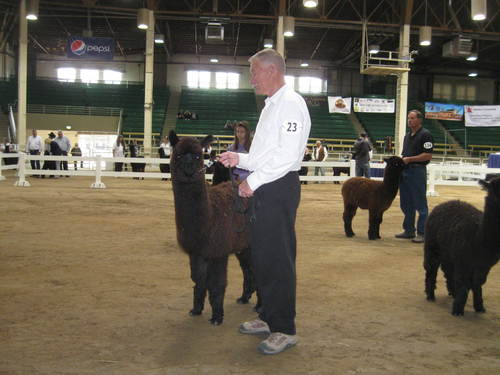 Ask a question
Details
Certificate
Black Diamond shows great promise as a herdsire. He is tall, and strong boned, one of the biggest males on the ranch and has dense bright fleece. Diamonds first show, GWAS 2015, garnered his first ribbon, a third place in a tough class of juvis! Diamond went on to earn several more ribbons. Black Diamond has a sweet disposition, is wonderful to handle and helps out in all our farm chores. He has been in several parades and wowed a 4H group during a demonstration, even after beginning his breeding career. His lineage is dominated by strong black lines, although he has lots of gray too. His dam Mile High Ruby Dee is a true black sister of Mile High Dorian Gray and Mile High Deacon Gray, and has produced gray cria. His sire, Daybreaks Chewy (black), is an Aussie Rockford (gray) great grandson.

2016: Diamond has been showing a large amount of gray fibers coming through in the last year. Most blacks have a white hair here and there, but this is more than that, and very consistent. Diamond was color tested at Fall Festival, they decided he didnt have enough gray to switch him to a gray class, but he did have enough to get the gate in the true black class. It will be very interesting to see what he turns out to be, and what he throws!